To all the players who entered the Waihi Beach Open Tournament held on the 3rd of January 2021.

As you know we played the first round of games to 7. First round winners went on to play to 9 and the losers continued to play to 7.

people who won playing to 7. We hope that you understand the decision to play to 7 was

made with the best of intentions. The weather forecast for that tournament day was

To the affected players please accept our sincere apologies for this.

​​​​​​​Another successful Waihi Beach Tennis Club Summer Tournament was completed on Wednesday 6 January in fine but very hot conditions. A record 80 players took part in this Senior Doubles event that resulted in close to 12 hours of high standard tennis. The Mens 1st Division Doubles final being the final match, and match of the day, being tied at 8 games all and the resulting tie-breaker going to Matt Trubshaw & Bruce Walpole to take the Championship 9 – 8 over Shannon Paki & Chris Patten. This match played in 26 deg at the end of a long day was extremely demanding and a credit to the players to last the distance.

Our Senior Tournament has had a fantastic response, it’s going to be a busy day with 76 matches to get through.

We ask for the cooperation of all players in accepting and playing to these regulations, so that we can

have a successful day, and finish the tournament on time.

required to play their next match before leaving the venue (for lunch, a swim etc), and to always be

ready to take to the court as soon as the earlier match has finished.

It is ESSENTIAL that warm-ups must not exceed 5 minutes

 All matches will be the first to 9 games with a tie breaker at 8 all.

 A 7-point sudden-death tiebreaker will be played if the two teams are tied at 8-all.

 In the event of any game reaching 40-all, “no advantage deuce” applies (the team that

scores the next point wins the game, with the receiving team choosing who will receive the

 Both mens divisions will start at 8.00am

(NOT 9.00am as previously advertised), following a briefing at 7.45am for all Mens players

(even if they don’t play in the first round)

 Matches will start at approximately 9.15am, following a briefing at 8.45am for

The weather Gods were certainly looking down very favourably on the Waihi Beach Tennis Club on Sunday being the Open Doubles and the 1st of the summer tournaments. Extreme weather had been predicted and even though all our neighbouring towns had rain and some flooding, the tournament proceeded without any time loss in good conditions.

There were some exciting and high standard of matches played with the 71 competitors taking part from near and far.

The below link will give you the match play and full results. Open the link and proceed to draws.

Due to the incredible response to our Open Tournament,  the Tournament Organising Committee has been forced to make some important changes to our original programme, in order to fit all 70 matches into the day.

We ask for the cooperation of all players in accepting and playing to these regulations, so that we can have a successful day, and finish the tournament on time.

We also ask that players always check with the Tournament organisers to see when they will be required to play their next match before leaving the venue (for lunch, a swim, etc), and to always be ready to take to the court as soon as the earlier match has finished.

It is ESSENTIAL that warm-ups must not exceed 5 minutes

In all three competitions, these match regulations will continue to apply to all matches, with the exception of first round winners in each division who will play to 9, with a sudden-death tie-breaker at 8 games-all, and the same “no advantage deuce” rule as above. (Depending on timing, these match regulations may be able to be relaxed for the three finals.)

A near perfect day greeted the record number of 64 players to the Waihi Beach Tennis Club’s second summer tournament being the Ladies and Men’s Vets (+35) Doubles Championship. Entries were received from Auckland in the north to Rotorua in the south. A very successful day was held by all with top tennis being played to a very responsive gallery.

The father and son combination of Brad and John Van Hellemond from Paeroa took out the Men’s Division 2 Championship by defeating Andrew Dallas (Omokoroa) and Robert Potts (Darfield) 11.5.

For full details of match play and results refer to our website wwww.waihibeachtennisclub.co.nz

Gradings:  If you don't agree with your TNZ grading; clarify this with your Club

If you don't have a TNZ Grading, it is your responsibility to ask your Club to determine your grading

Rules for the day will be communicated at the pre-play brief.

For both tournaments briefing time: 8:45

For both tournaments play starts at 9 am

Please check our website the night before both tournaments for any notifications eg: Cancellations and change of start times.

The kitchen will be open for business.

We look forward to seeing you at our Club.

Results will be counted for TNZ MatchHub grading points.

The standard was considerably higher than the previous two invitational tournaments and some amazing fast tennis made wonderful viewing. Thanks to all of the players and the assistance from Junior Members and their parents and of course the club members/stalwarts who assisted with the smooth running of the tournament.

Full results for our Summer Tournament Series including each individual game are now available through Tennis NZ on this page. Click on 'enter on line' of the tournament you are looking for and which has completed. Then click on Draws which will give you the choice of the Mens or Womens draws. This will then give you all the results of the games in that draw. Other tournament details are also available.

Perfect weather for the Junior Tournament held at the Waihi Beach Tennis Courts today. A good field of entries from Auckland & South contested a very successful tournament.Junior Winner was James Flay and runner up was Beno Shaw both from Cornwall Park, Auckland.

. Photos in the gallery.

A record 70 players competed in the Mens and Ladies Vet Doubles, the 3rd tournament of the 2018/19 Waihi Beach Summer Series, held on 2nd Jan. Players travelled from Albany in the north and from the Waikato and Bay of Plenty. Perfect weather with some very close games, resulted in a very enjoyable day for the big gallery. Local highlight of the day was Craig McFarlane and Kevin McLoughlin of Waihi Beach club taking out the 2nd division final 6/3, 6/3.

A perfect, although very hot day, greeted entries to the Mixed Open Tournament held at the Waihi Beach Tennis Club courts on Saturday 12 January. Last years winners, mother and son combination Delwyn and Jack Guilford of St Peter’s, repeated their achievement to take out the 2019 title. The full results were:

Pics in the gallery.

The final Tournament of the Waihi Beach Tennis Club Summer Series was held on Tuesday 9 January in perfect conditions. Entries for the Open Mixed Doubles were received from Christchurch, Wellington and throughout the North Island. There was a very high standard of tennis with the mother and son combination of Delwyn and Jack Guilford from the St Peters Club in Cambridge taking out the title for the second consecutive year.

The next Waihi Beach Tournament is the Waihi Beach Tennis Clubs inaugural Cooper Tyres Invitational Fast4 Tennis Tournament to be held on Saturday 27th January. There will be 12 teams of 3 players with each team to have at least 1 lady member. This is a higher ranking event by invitation only and the high standard of tennis will result in very entertaining Anniversary Weekend entertainment.

Due to lack of entries this tournament has been cancelled

48 men and 24 men from all over the central Nth Island contested the Mens and Womens Doubles at the Waihi Beach Courts on the 2nd January. The weather was ideal at the start of the day with cloudy and cool conditions but light rain developed later in the day which did require some shuffling but all games were able to be completed which resulted in another very successful day for the club.

The final tournament of the Waihi Beach Tennis Club Summer series was held on Saturday in ideal conditions. The Open Mixed Doubles Tournament attracted 21 pairs from the Bay of Plenty, Waikato through to Auckland. Winners on the day were the mother and son partnership of Delwyn and Jack Guilford of the St Peters club who played a very high standard of tennis. (Photo attached).

The full results were

Many thanks again to tournament director Devon Brooks, Secretary Helen Harrison and Yvonne Wicks for organising and running the tournament, to Jane and all her helpers and to all those members who donated food for the kitchen that made it the success it was and finally to all those members working in the background to present the courts and clubhouse in the prestine condition it is. Thanks to all, the series has been very successful.

A perfect day greeted the 64 entries for the Mens & Womens Open Doubles at the Waihi Beach Tennis Courts. Entries were received from as far a field as Auckland in the north and Tirau in the south. Tennis was of a very high standard and there were many close games the highlight of which was the mens final which went the full distance in an exciting finish. Combinations from the St Peters Club clinched both the Mens and Ladies Championships.
Results:
Ladies Championship winners
Delwyn Guilford & Helen Litt (St Peters).
R/U Janis Smith & Marietta Duffy-Burgess
(Gate Pa).

Thursday 31 December 2015
Boys and Girls Junior Tournament
26 players entered in the Boys & Girls Tournament. The weather was fine but very humid. A full day’s tennis took part with a good gallery of onlookers who enjoyed some wonderful tennis from these up and coming players.

Monday January 4th 2016
Vets (over 35)
Mens’ Doubles and Womens’ Doubles
Although the day started in light drizzle the correct decision was made to play on which resulted in cloudy, warm conditions prevailing but finishing under floodlights. 52 men and 28 ladies entered the doubles competition representing clubs from Auckland, Waikato and Bay of Plenty regions. Highlight was ‘local’ members Edith Kirk and Liz Johnson just missing out on the Womens’ Championship in a thriller, tie breaker final.


January 9th 2016 - Open Mixed Doubles.
The final Waihi Beach Tennis Club's tournament of the summer season was held on Saturday attracting 14 couples for the Open Mixed Doubles. The weather was cloudy in the morning becoming fine with gusty winds after lunch. A very successfull tournament completed the summer series with entries again coming from Auckland, Waikato and Bay of Plenty. Thank you to all the competitors, sponsors and local club members that all contributed to make this summer series such a success.

Summer Tournament Dates & Results 2014/15
Hi All The last tournament of the summer series, the Golden Oldies over 60yrs doubles, was held on 25th January in perfect although very warm conditions. Entries were lighter than for the previous tournaments but players travelled from the Waikato and Bay of Plenty to take part. Special mention must be made of local club members Dana Posa and Frank Warn who with a total of about 157 years of experience between them competed so well in the hot conditions. The results were.
Championship Doubles:
Winners: John van Hellemond and Welton Browne (Paeroa)
Runners Up: Fred Cleave and Mark Gilmour (Tauranga)
2nd round plate: Clem Apted (Te Aroha) and Jim Jackson (Tatuanui)
Runners Up: Murray Preston (Te Aroha) and Don McKay (Whangamata)
1st round plate: Phil Laurence and Tony Dillimore (Waihi Beach)
Runners Up: Devon Brooks and Tony Roberts (Waihi Beach)

Seniors Entry Fee:
$20 per player per event payable in cash on the day
8:30 am Registration all senior events 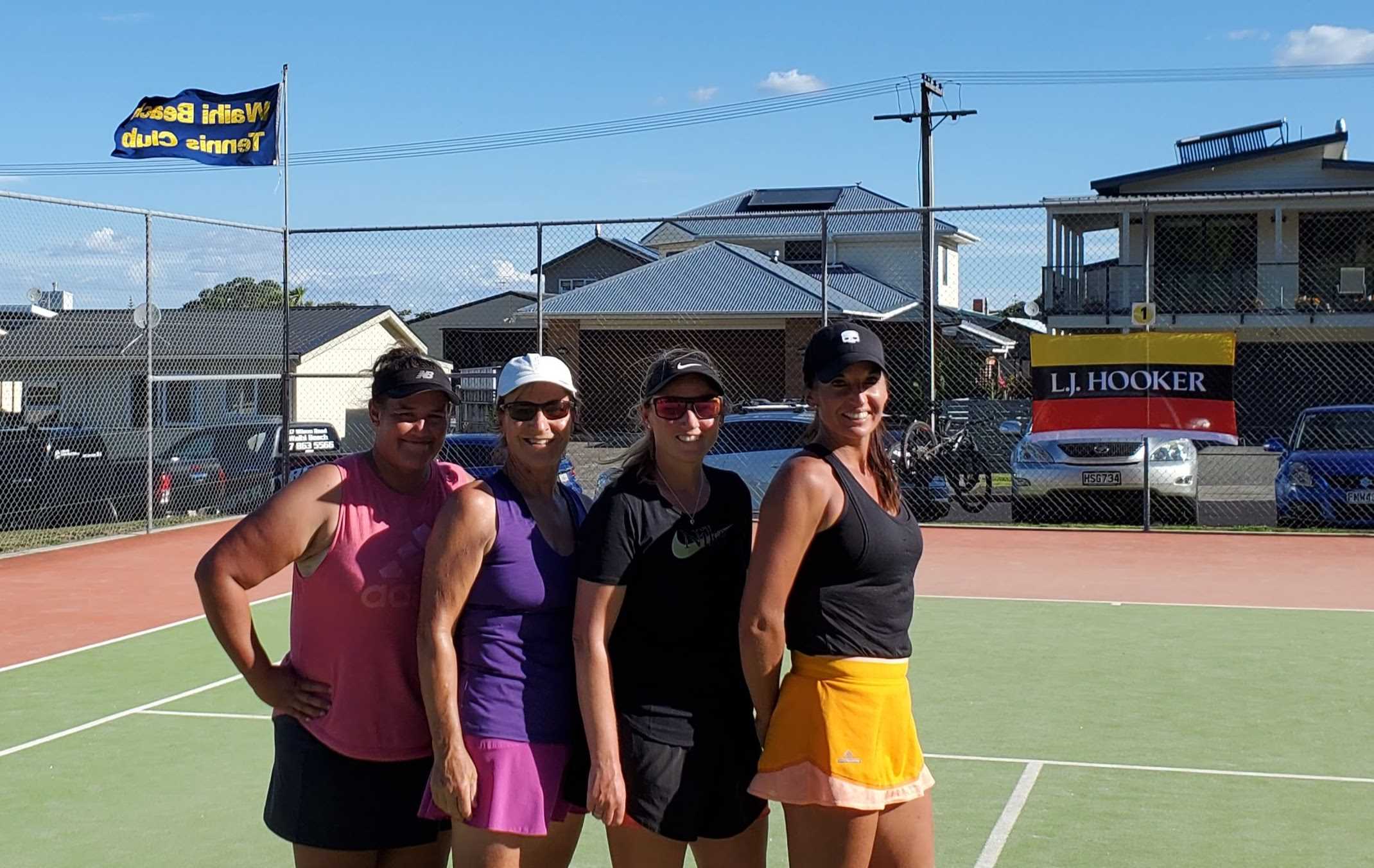