Following you will find further details.

The Over 60's Mixed Doubles Championships were held on Friday 19 March. Although the entry numbers weren't huge, there were some good games played and in excellent club spirit!! Congratulations to all the players. Winners of the trophy: Paul Hitchman and Carolyn McCracken. Runners up Jenny and Bruce Aitken. Jenny and Bruce arrived well kitted out complete with their antique tennis bag. It's great to see such memorabilia. Thanks to all those who entered and to the very supportive spectators!!

The weather was perfect for the singles club championship yesterday (13 March). It was a grueling round-robin of 5 rounds. As there was only one female contestant, Laura Richardson, everyone agreed Laura should join the men's tournament.

The contestants played out of their skins with only Karl and Mark completing the 5 rounds and all agreeing it was asking a bit much. The final being John Alexander vs Simon Phillips and at 7 all (in the first to 9 match) Simon succumbed to injury. So John takes the championship yet again.

The biggest upset of the day was Simon Phillips beating Laura Richardson.

With no other lady entries, Laura will hold onto the woman's title.

You will find attached a photo of the champions. And most of the contestants. Simon Phillips, Mark Richardson, Laura Richardson, John Alexander and Cam Arthur. Absent from the photo is Karl.

The champion of champions match, Laura vs John, will be played at a later date, we'll keep you posted on that.

6th March 2021. The Women’s and Men’s 2020/21 Doubles were Round Robin competitions of 4 teams in each and the Mixed Doubles was a “one-off” match with only two combinations entered. All matches were first to 9, and a 7 point tie break at 8 – 8.

Women’s Doubles – Laura and Jane won all three matches – whilst on paper, the closest was 9/4 against Kerry and Linda – it was a close match.

Mens Doubles – John and Craig beat Grant and Mike in a very tight match – and won it in a tiebreaker.

Mixed Doubles – Laura and Mark beat Linda and John (who were a pick-up team on the day) in a very tight tiebreaker.

Thanks to everyone that played in great weather and great spirit – it was appreciated.

Last weekend the Waihi Beach Senior Championships were held in near perfect weather.

The weather this weekend continued to play its part for the Senior Single Championships. The Men’s Championship resulted in a hat trick win for John Alexander who defeated Jimmy Lynch in the final, clinching the Senior Men’s Championship for the 3rd consecutive time. The women’s final was contested between Laura Richardson and Sue Rafe with Laura coming out the eventual winner for the second season in a row.

The shoot out over 1 set between the Women’s Champion and the Men’s champion resulted in a win to John over Laura so reversing last year’s result.

The Waihi Beach Tennis Club 60+ Championship was held on Friday 13 March with 10 local teams contesting this inaugural event in perfect weather conditions. Winners on the day were Rachel Paterson and Jimmy Lynch with John Purkis and Win Buttimore as runners-up.

The Ted McCowatt Memorial Trophy for 60+ members was held on Tuesday with 22 players taking part. Winners on the day were Sharlene Stewart and Tony Delany. A very enjoyable morning on a very warm day.

Following are the trophy winners:

Champion age and grade results are:

It was a perfect day on Sunday  10 March for the 1st day of our club championships being the singles championships.

The Ladies singles championship was won by Laura Richardson with Edith Kirk as runner up. In the Mens singles Championship John Alexander made it two in a row winning the title over runner up, Mark Richardson.

A first ever shoot out between the Ladies Champion and Men's Champion resulted in a win to Laura.

Day 2  results of the Doubles Championships

Our Club completed the 2019 Club Championships on Sunday  17 March in near ideal but very warm conditions. A very good entry of players and a good number of spectators enjoyed some very entertaining tennis.

Results from the day:

A very successful non championship 60 yrs plus event was also held for the first time which was enjoyed by all competitors and because of its popularity is likely to be in next years championships. Winners on the day were Don Young and Tony Van der Heyden.

Mixed doubles. Winners: Julie Stock and Cam Tafft who took out the tiebreaker 7:3 in a nail biter over Jane Broughton and Jimmy Lynch.

At the Waihi Beach Tennis Club Junior prizegiving on the 9th April the following awards were presented.

The Waihi Beach Tennis Club held the 2016/17 end of season closing and prize giving on Sunday 11th and those playing tennis did so in ideal conditions. Club President Craig McFarlane closed the summer season and in doing so thanked the committee, the many member volunteers, especially those associated with the Junior coaching and organisation. It had been a record year for Junior members and the club, and the sport of tennis in general was much stronger for it. Craig passed on special thanks to coach Shannon Paki for his efforts and commented on his dedication to the Juniors and the support he gave to our club throughout the summer season which now is continuing through the winter months.

The following are the trophy and award winners for the 2016/17 season.

Results of the 2017 Senior Championships held on Sunday 26th March .

Entry forms posted on the notice board at the Clubrooms.

Entries must be in by 5pm on the preceding day of the Championship.

Please be sure you are available for the rain dates before entering.


The 2014 - 2015 Annual Awards presentations and BBQ was held on Sunday. Unfortunately the weather was not kind and the tennis and BBQ had to be abandoned. However, the awards and afternoon tea went ahead and was enjoyed by a good gathering of players. The2014 - 2015 Waihi Beach Tennis Club Champions & Award Winners were:

The final day of the Waihi Beach 2014/15 Championships were held on Sunday starting in perfect conditions and ending with a few cooler showers. The Mixed Doubles Championships were run as a round robin and were won by Dave Tait and Chrissy Cotton with 18 points. Runners up with 22 points were Jimmy Lynch and Pam Rhodes and tied for third were Devon Brooks and Mary O’Connell with Phil Laurence and Helen Harrison.

Girls Singles and Boys/Girls Doubles were not competed for.

No girls doubles competed for. 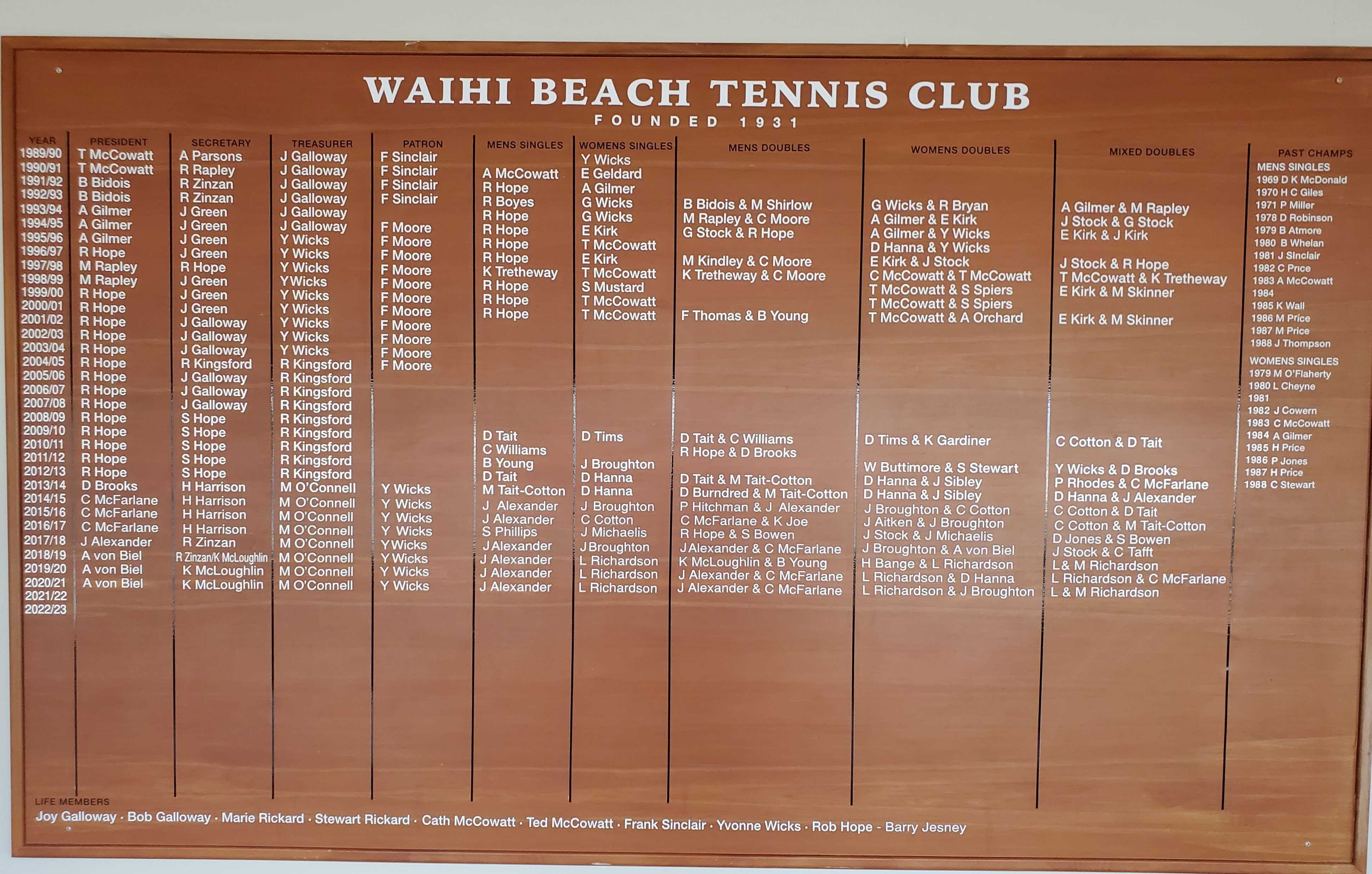 WBTC Honours Board 2020/21
Powered by Sporty.co.nz